How Kernel Weight Varies by Hybrid in Iowa

The Challenge of Estimating Kernel Weight 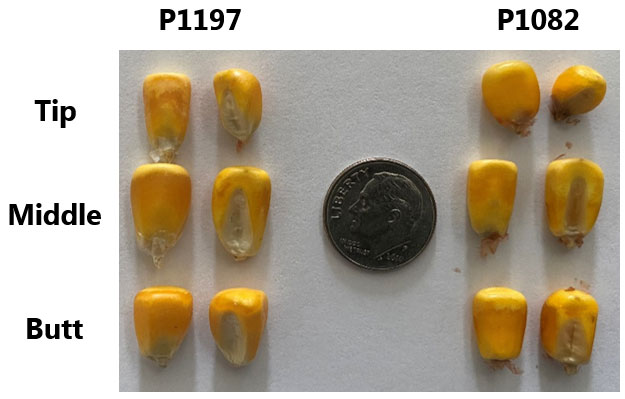 Figure 1. Representative kernels from the tip, middle, and butt of an ear from hybrid families with above-average (P1197) and below-average (P1082) kernel weight in 2019. Photo courtesy of Bill Long.

Table 1. Kernel weight as a percentage and standardized kernels/bu by hybrid family.

The foregoing is provided for informational use only. Please contact your Pioneer sales professional for information and suggestions specific to your operation. 2016-2020 data are based on average of all comparisons made in over 63 locations through Dec. 1, 2020. Multi-year and multi-location is a better predictor of future performance. Do not use these or any other data from a limited number of trials as a significant factor in product selection. Product responses are variable and subject to a variety of environmental, disease, and pest pressures. Individual results may vary. Pioneer® brand products are provided subject to the terms and conditions of purchase which are part of the labeling and purchase documents.